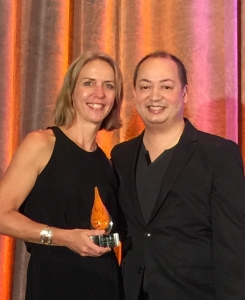 Wasco County Assessor and Tax Collector Jill Amery has received a national award recognizing her work over the last year and a half to implement the tax and assessment software system that was left flailing with the passing of Assessor Tim Lynn and further complicated by issues in the County Treasurer’s office.

At the annual conference for the national software company Thomson Reuters Tax and & Accounting Software & Research Solutions, Amery was awarded the Excellence in Leadership Award out of a pool of over 1,600 municipal governments from across the country and worldwide.

Amery was first elected to the position in 2014 after the passing of former county assessor Tim Lynn. She started working in the office part time in May and officially took office in January, 2015.

From the beginning there were issues with coordinating tax collections with the County Treasurer and the Finance Department. The county’s audit for fiscal year 2013-14 identified several areas that needed to be brought up to acceptable accounting practices.

According to a statement issued by Thomson Reuters, “Jill surpassed the challenges that faced her. She harnessed her knowledge of the Oregon business process, quickly learned county complexities, and successfully managed cross-functional interactions while fostering interdepartmental collaboration. She regularly engaged with stakeholders, built strong relationships with peers, and, in the words of her colleague, ‘weathered it all with grace and poise’.”

By June 2015 Amery and other county finance officials had integrated the taxation and general ledger functions and resolved most of the issues associated with the Treasurer’s Office and audit.

“We are now golden”, said Tyler Stone, Wasco County Administrative Officer. “Not just Jill, but the entire office came together to help resolve these issues”, he continued.

Thomson Reuters provides the computer software for the county’s appraisal, assessment and taxation functions.  This software is probably the single most important piece of software in the County and has implications not only within the County but also across other jurisdictions such at cities, school districts and special districts.

“On behalf of all of us at Thomson Reuters I would like to congratulate Jill on this Excellence in Leadership Award”, said Diana Flanders, Vice President of Customer Operations, Tax and Accounting, Government for Thomson Reuters.

The awards “recognize jurisdictions and officials that have achieved excellence in planning, leadership, and service,” according to Thomson Reuters’ press release.