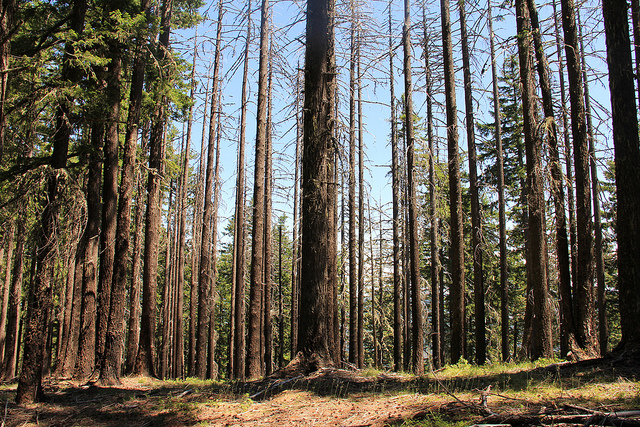 Trees in Curry County, photo by Bureau of Land Management

Curry County Commissioner David Brock Smith spent much of last week in Salem with the Oregon Emergency Board — and has returned with a pledge from the state for $250,000 to fight the steady march of Sudden Oak Death here.

The money is for the new state Sudden Oak Death (SOD) Task Force, which will convene soon to plan an attack to keep the pathogen at bay — or preferably eradicate it from the county altogether.

SOD has reached epidemic proportions in Curry County and if left unchecked, could ultimately hit the financially hard-strapped county with even worse economic woes for growers — from trees to cranberries — unable to ship their product out of the area.

The remainder, a $50,000 block grant, will be used by the Association of Oregon Counties to manage the task force, convene local stakeholders, discuss treatment methods and as leverage for federal grants for additional funding.

“This is the first time ever there’s been a block grant from state funds to the AOC,” Smith said. “It shows the importance of the task force, but also the work needed to get it done.”

The task force will be comprised of county commissioners from the at-risk counties, representatives — “We know the industry folks best,” Smith said — and state and federal agencies.

“The whole purpose is to leverage more resources for the feds to go after this so Oregon doesn’t fall to the same fate as California has,” he added.

Sudden Oak Death is caused by a pathogen called  P. ramorum, which primarily attacks tanoaks, but increasingly Douglas fir and other iconic state flora. Treatments over the years have been able to keep it in check. And last year it took a quantum leap, forcing foresters to double the size of the quarantine area.

In 2001, an estimated 9 miles of land in Curry County was infected with SOD; since then, it has grown to 515 square miles. The quarantine area now extends from Gold Beach and about 13 miles east along the Rogue River, dog-legging south and east to the border at a point about two-thirds of the way to the Josephine County line and west to the coast.

An area within it, comprising much of the Brookings area, is considered generally infested and is not being actively treated anymore.

A map provided by the in a state House briefing paper shows colored areas indicating the severity of the infestation, with all rated “high” or “very high” with the exception of a swath at the north end of the county and another at its southeast flank.

If the pathogen escapes the confines of the quarantine area, it could spell economic disaster for this county and possibly the state, Smith said.

“It has the potential of closing down the Port of Coos Bay,” he said, referring to countries that won’t accept logs and other items that originate in SOD-infected areas. “All the nursery industries, the lily bulbs, would be devastated.”

Of additional concern to Smith is the berry crops in the north end of the county for which he recently obtained trade status with China. A requirement for the sale of the fruit is that they maintain their phytosanitary certification, which could be lost if SOD grabs a toehold here.

The urgency comes after news that SOD in California, which has been fighting the pathogen since 1995, has grown so big and is spreading too fast to eradicate statewide, according to the Proceedings of the National Academy of Sciences.

More than 163,700 square miles of land are infected in the northern part of the state.

“At this point, we’re going to have to learn to live with it, and try to slow its spread with local management efforts and lots of experimenting,” said UC Davis ecologist Richard Cobb.

SOD is expected to accelerate after 2020 as the pathogen stretches to the northwestern coast in California, where large regions of “host plant species” and suitable weather conditions exist, Cobb said.

“That is why this is so important for Oregon,” Smith said. “We must stop it before it gets to the point it can’t be eradicated. We’re not at that point yet.”

The state has invested $3 million, and the federal government $14 million, since 2001 in attempts to eradicate the pathogen. Work generally involves finding host trees‚ usually using spore traps in waterways and tracing them back upstream — and cutting and burning down those infected trees.

The only way to completely eradicate SOD, however, would be to clearcut an estimated 3-mile buffer around the quarantine area to prevent its spread.

It’s a slight silver lining in the battle, Smith said.

Smith, who is running for State Representative in District 1, has been working with others in that district — Coos, Josephine, Douglas and Curry — to impress upon other electeds in Salem the importance of the state economy as it relates to the spread of SOD.

“People who are losing trees on their property are losing property value,” Smith said. “I want the task force to identify alternative treatment methods so we can aggressively go after this.”

According to the National Academy of Sciences study, the only effective treatment is the removal of host species — trees.

Another concern is that SOD isn’t tanoak-specific.

Studies of dying trees have shown it is breaking new ground in Douglas fir forests — and drought weakens the trees, making them more susceptible to all disease. The coming summer is anticipated to be another dry year in California and Oregon, weather forecasts indicate.

“When it comes to the arrival of new diseases, our computer modeling conveys a powerful message,” said UC Davis ecologist David Rizzo. “Jump in with both feet, or face the consequences later on.”