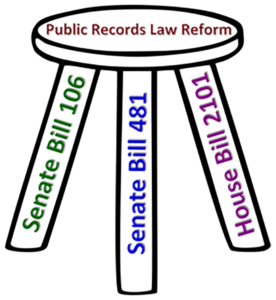 In 2017, the Legislature made the most significant changes to public records law in more than 40 years. Among other things, the comprehensive reform bills, SB 106, SB 481, and HB 2101, supported by the Association of Oregon Counties (AOC), established timelines for public bodies to acknowledge and respond to most public records requests, created a state public records advocate and advisory council, created a sunshine committee to review existing exemptions, and directed the Oregon Department of Justice to generate the state’s first searchable database for public records exemptions. Only a year and a half into implementation of the new law, legislators have proposed several bills aimed at further public records reform.

At the edge of first chamber deadlines, the House Committee on Judiciary moved one of those bills relating to public records reform. In its original form, House Bill 2353 allowed the Attorney General, a district attorney, or a court to impose a penalty on a public body and require it to pay reasonable attorney fees to a public record requester if it was determined that the public body responded to a request for public records with undue delay or failed to respond.

Bill sponsor Representative Karin Powers convened a work group to address the complications the bill raised. From the work group, Rep. Power proposed an amendment that stripped the bill of the attorney fees and added in the ability to order a waiver of fees. The amendment also set the allowable penalty at $200. AOC Legal Counsel Rob Bovett served on the work group and signed off on those bill modifications. The amended bill passed out of committee unanimously and will move to the House floor for a vote.  Work will continue on the other reform bills.

AOC is supportive of transparency and accountability in the public records process.