On a unanimous vote, Lane County Commissioners, passed a Stepping Up Resolution on May 23, 2017.  The resolution formalized ongoing efforts to reduce the number of people with mental illnesses in the Lane County Jail.

Lane County has been an innovative leader in building collaborative between their local mental health and public safety system partners in recent years.

“We know that a startlingly large portion – as much as 60 percent – of our inmate population is suffering from mental illness,” said Chair Pat Farr. “Creating a safe and healthy county is a priority of the Board and Stepping Up will complement and help us strengthen our current efforts to better serve those with mental illness in our community.”

Lane County joins 365 other counties from across the country in joining the Stepping Up Initiative. The resolution was brought forward at the request of Commissioner Jay Bozievich.

Under the leadership of AOC President and Lincoln County Commissioner Bill Hall, AOC has made the Stepping Up initiative a priority during 2017.  President Hall noted, “People with mental illness rarely belong in our public safety systems. We rarely see good results, and sometimes the outcomes are tragic. It doesn’t have to be this way. We have the tools to improve public safety, help people toward recovery, and save money in the process.”

On May 9, AOC hosted a day long Stepping Up Summit to promote continued and expanded local efforts to address the problem. 14 Oregon counties have passed their own Stepping Up Resolutions.  “It would be great to see Oregon became the first state to reach 100 percent participation in this effort,” said Commissioner Hall. 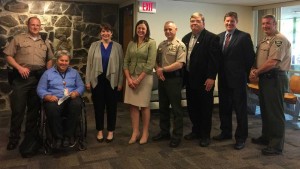 Stepping Up Presentation Before Lane County Board of Commissioners on Tuesday, May 23, 2017. 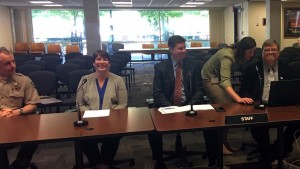